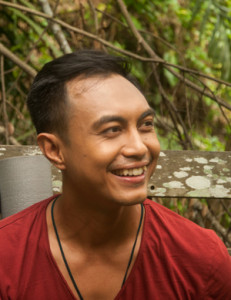 “We’ve chosen to be here. Learn to enjoy it!”
Om Swastyastu

Eka Kailash is a native Balinese man who enjoys exploring the world.

He was born and raised in the southern part of the island in a traditional Balinese Hindu family.

His curiosity about life outside the island and his passion for Broadcasting took him to Java after graduated from high school. He studied communications, and worked as a researcher and a broadcaster in Yogyakarta for over five years. An ambition to live the American Dream brought him to Ohio and Washington D.C. where he pursued his master’s degree and a professional career in broadcasting for three years.

“We’ve chosen to be here. Learn to enjoy it!”

Two months prior his departure to the United States he experienced severe back pain as a result of years of a stressful and unhealthy life style. The pain introduced him to the healing power of Yoga and Meditation in which he practiced between study, work, and pleasure during his stay in America. Since then he became deeply curious about what lies beyond the material-oriented American Dream. Finally he decided to follow his heart and return home to explore a new way of living.

Eka has been blessed to be able to meet many masters, teachers, healers and kind people in his journey of healing and spiritual study. They have helped him integrate his experiences in the Eastern and Western world into offerings that he shares with people from various walks of life.

Eka has been teaching Yoga and Meditation for over six years. He also offers Craniosacral therapy and Light Therapy at his humble clinic in Ubud, Bali.

He is always curious about what lies beyond and will never stop exploring.